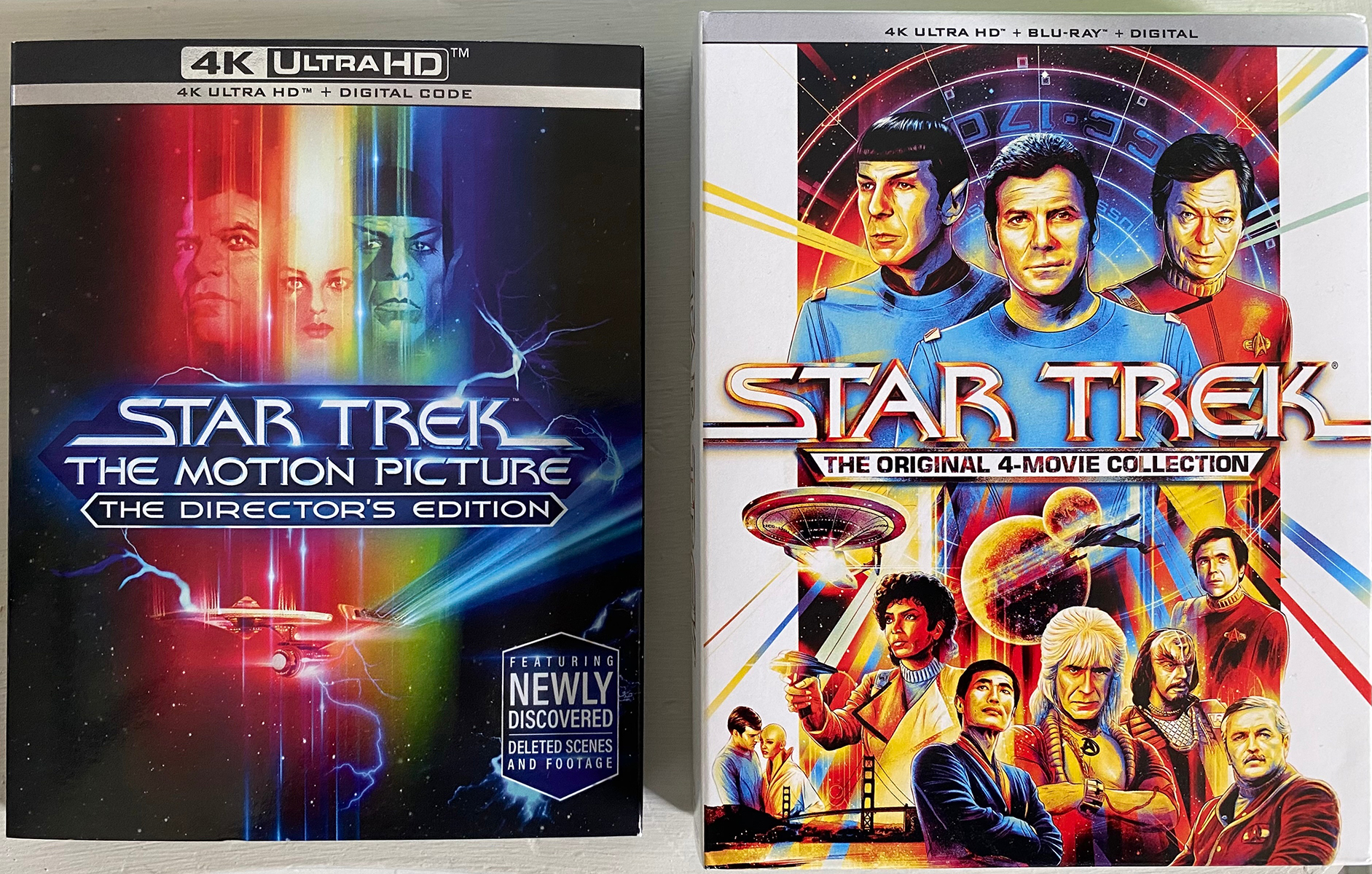 I just got my hands on a copy of the newly remastered (with newly discovered deleted scenes and footage) Star Trek- The Motion Picture, and having reviewed the earlier boxed set of BD and UHD 4K BD, I thought I would share my thoughts and explain some of the changes that have occurred. This newly minted version is closer to what the director (Robert Wise) wanted instead of the rushed and poorly edited version that made it into the theaters in 1979, and later, on television. Is the Director’s Cut worth the upgrade?

The Director’s Cut comes in at 136 minutes, which is about 5 minutes more than the 2021 UHD version, so yes, some scenes are added and expounded upon. The storyline is a bit altered at the beginning which adds to a more coherent story progression. The obvious thing people will immediately notice is the color timing changes (no more red skin tones on Spock on the surface of Vulcan for example) and some of the CGI effects are more polished and detailed. These effects are in 4K, not 1080p as most effects that were used in the 2021 version. I am including some screenshots as illustrations, and they were taken from my iPhone for comparison purposes. As seen on my 77-inch LG OLED, I can clearly see these differences.

The Klingon battle cruisers are detailed enough to rival anything you would see in Star Wars.

The opening scenes on Vulcan now show more of the terrain in which location it was shot and are not so focused on the low-quality CGI effect of moons floating in the red sky. The ginormous statues are in exquisite detail and the harsh red tones are diminished with the new color grading. 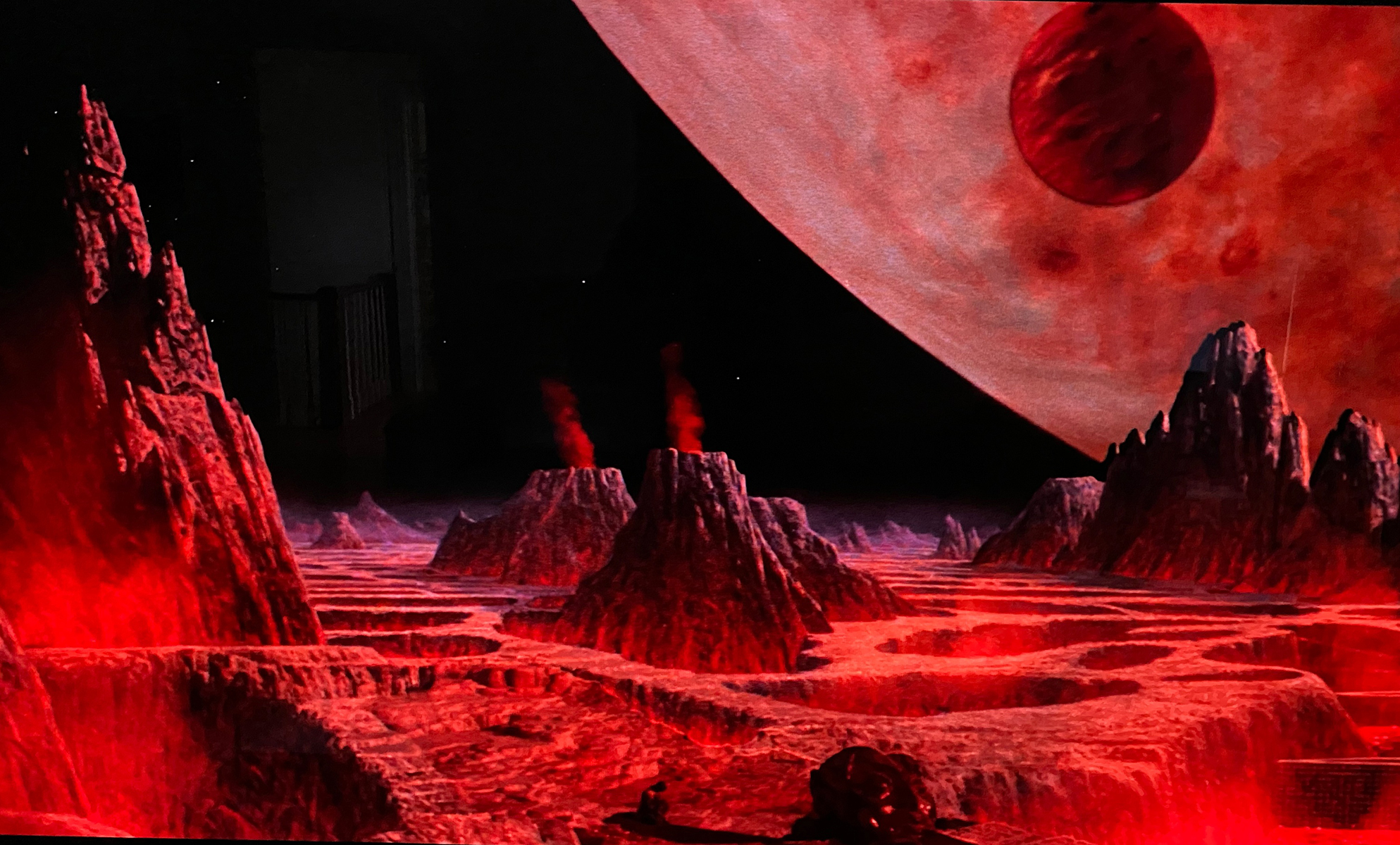 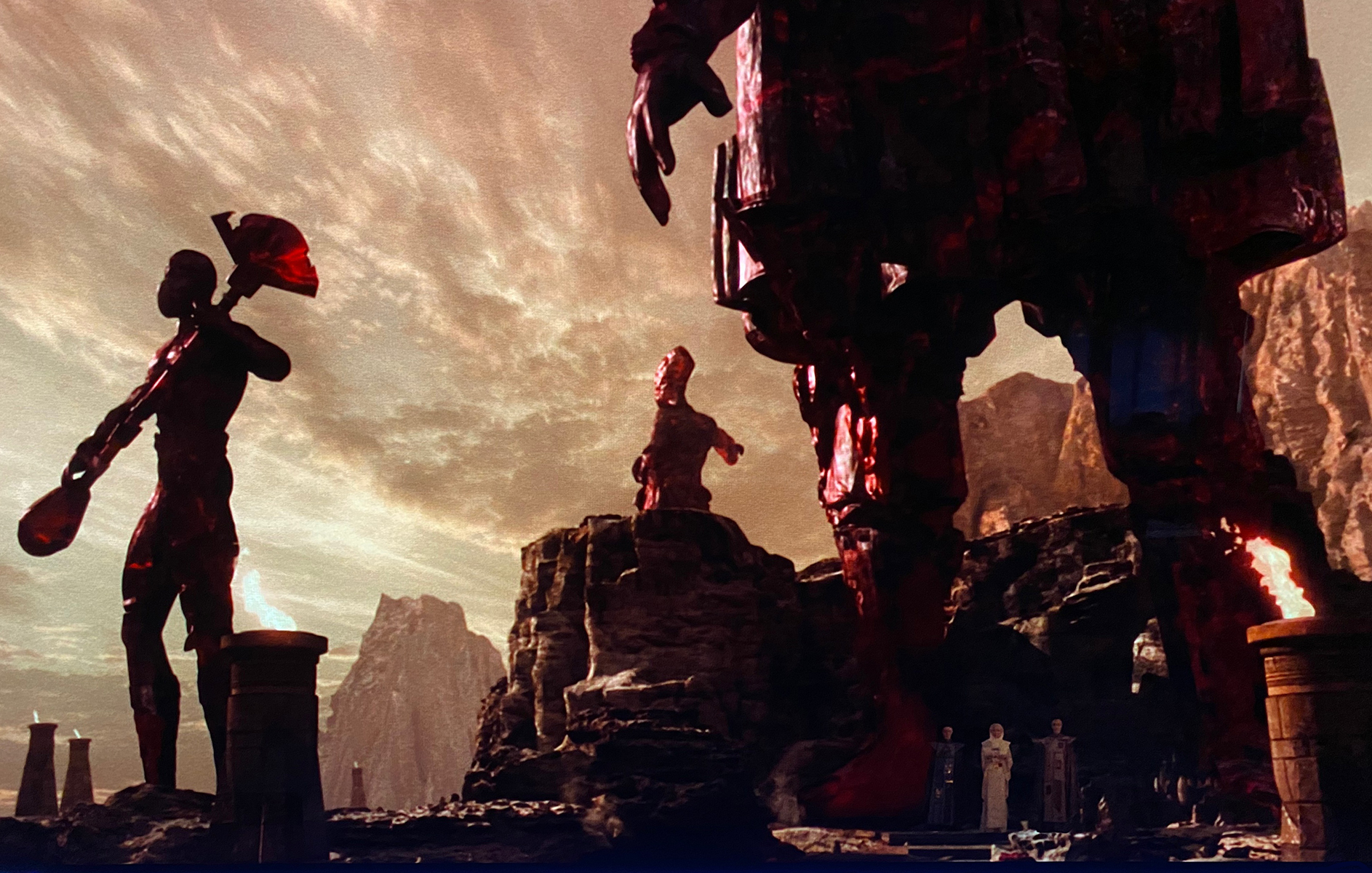 Moving back to Earth, Kirk arrives on a shuttle, but the scene is now much more interesting and detailed against the Golden Gate. 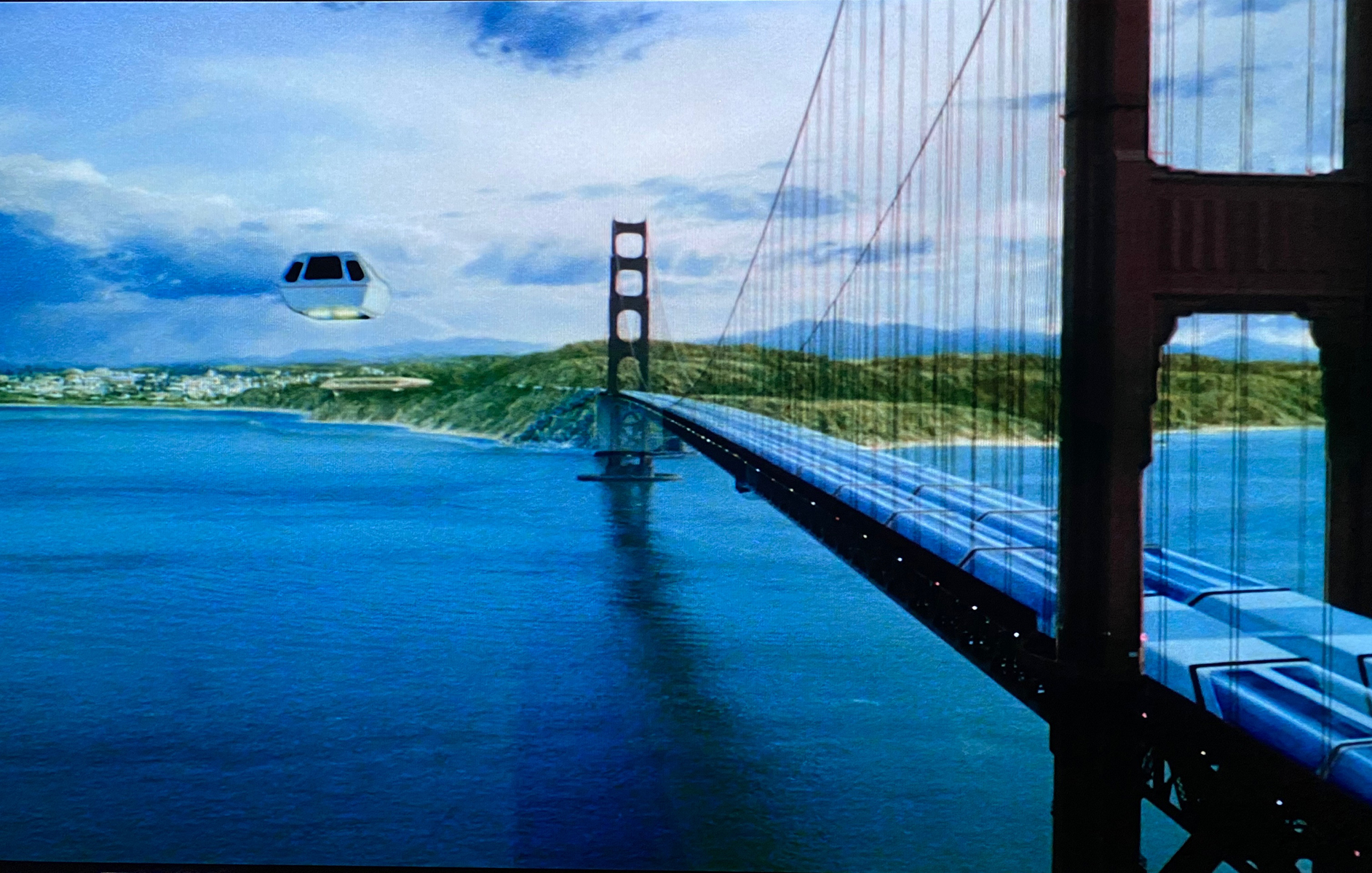 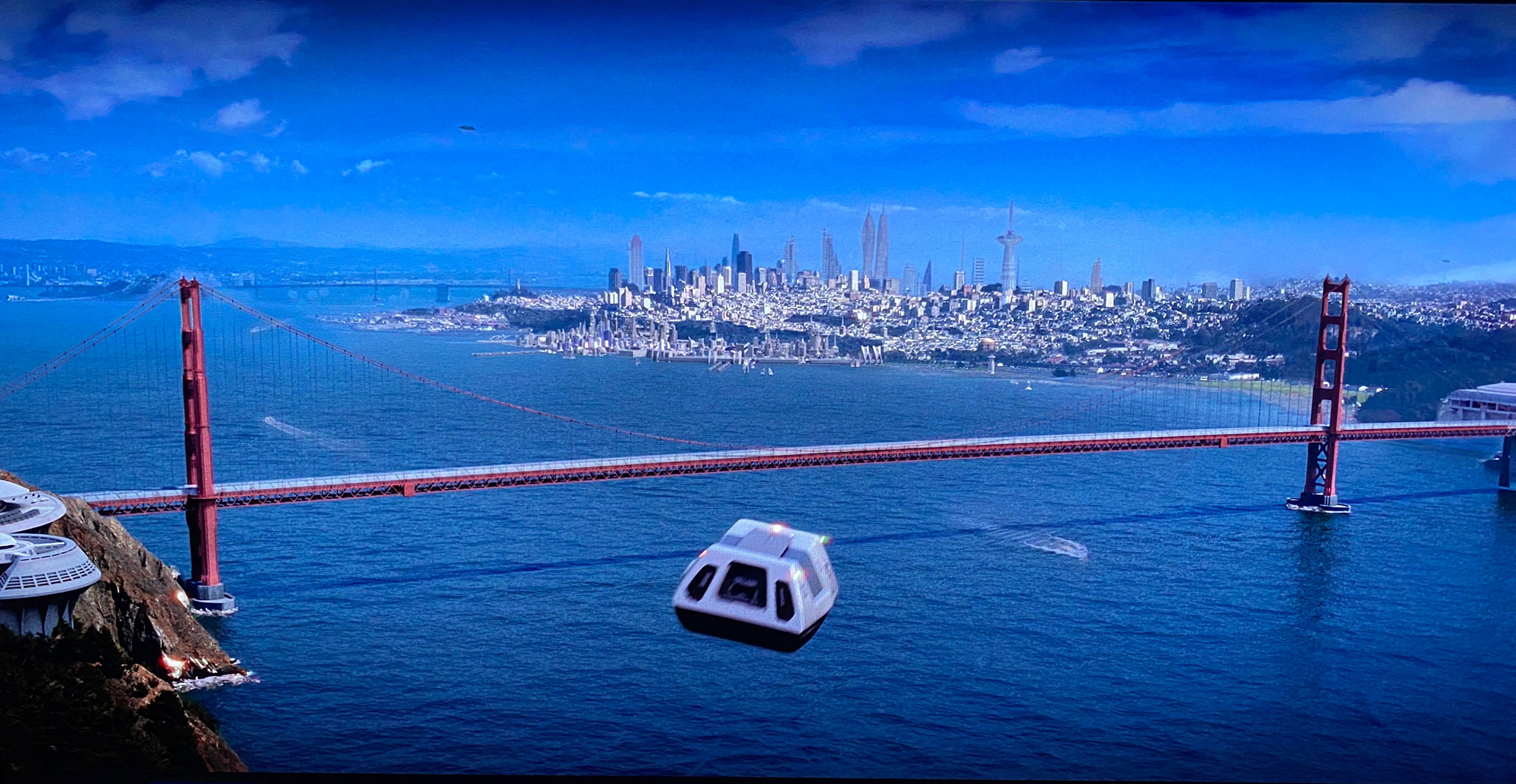 Some scenes are totally re-imagined, as you can see from this shot of V’ger’s ship. Where the original had a murky and fuzzy cloud-like appearance, the new craft is sinister and highly detailed. It’s not so detailed as to make it stick out like a sore thumb, but it blends in nicely with the action and is more believable and ominous looking. Hard to imagine that the Enterprise had to travel almost 17 miles to get to the center of this ship. Talk about getting your own Zip Code! 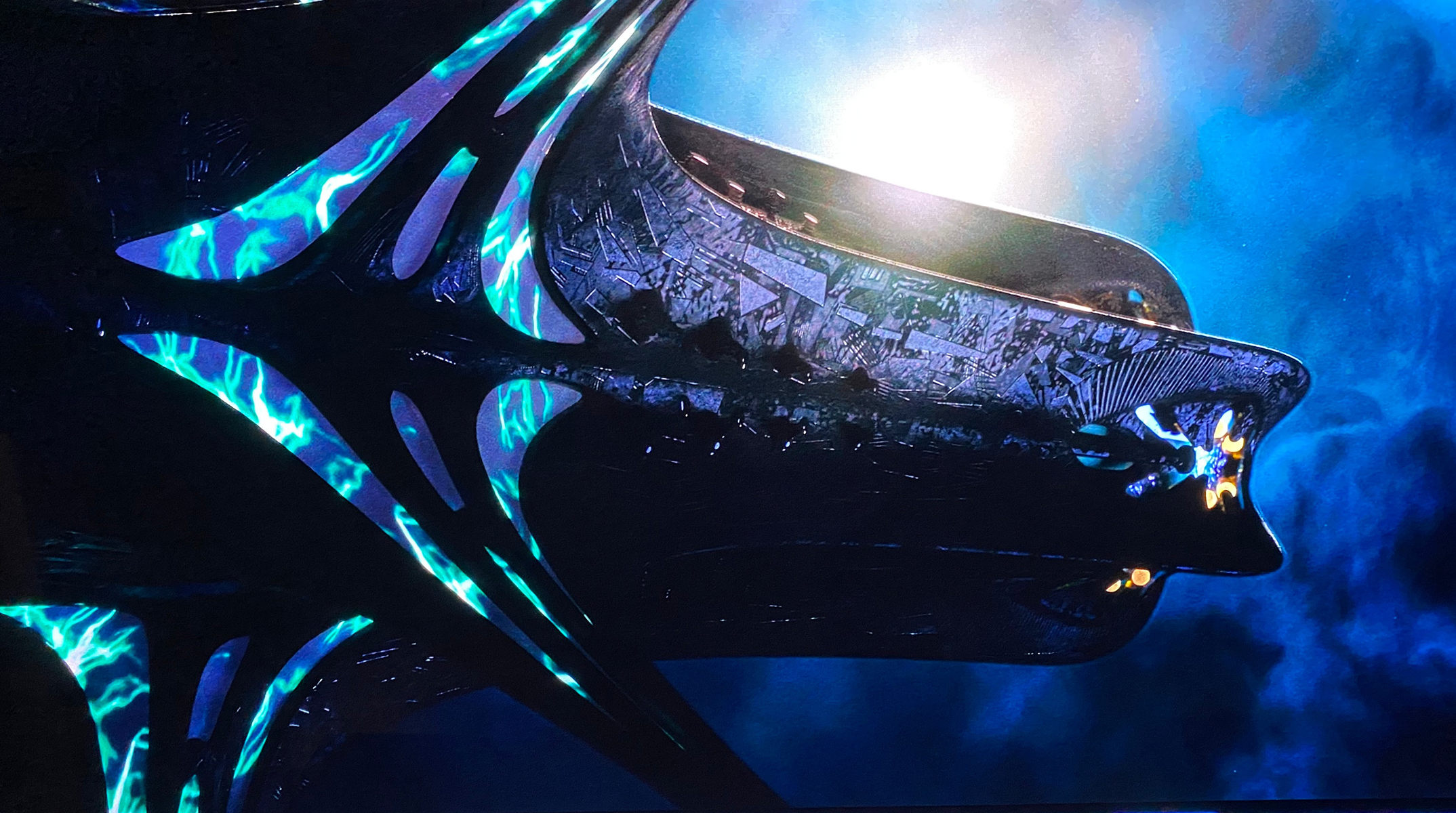 Here is a good example of the color grading in close-up. Our intrepid trio has just learned that V’ger is going to eliminate the “carbon infestation” on Earth. You can see better skin tones and less cool blue in their uniforms. In general, I notice an uptick in detailing to the point where you would think this movie was only filmed recently. Bravo, Paramount! 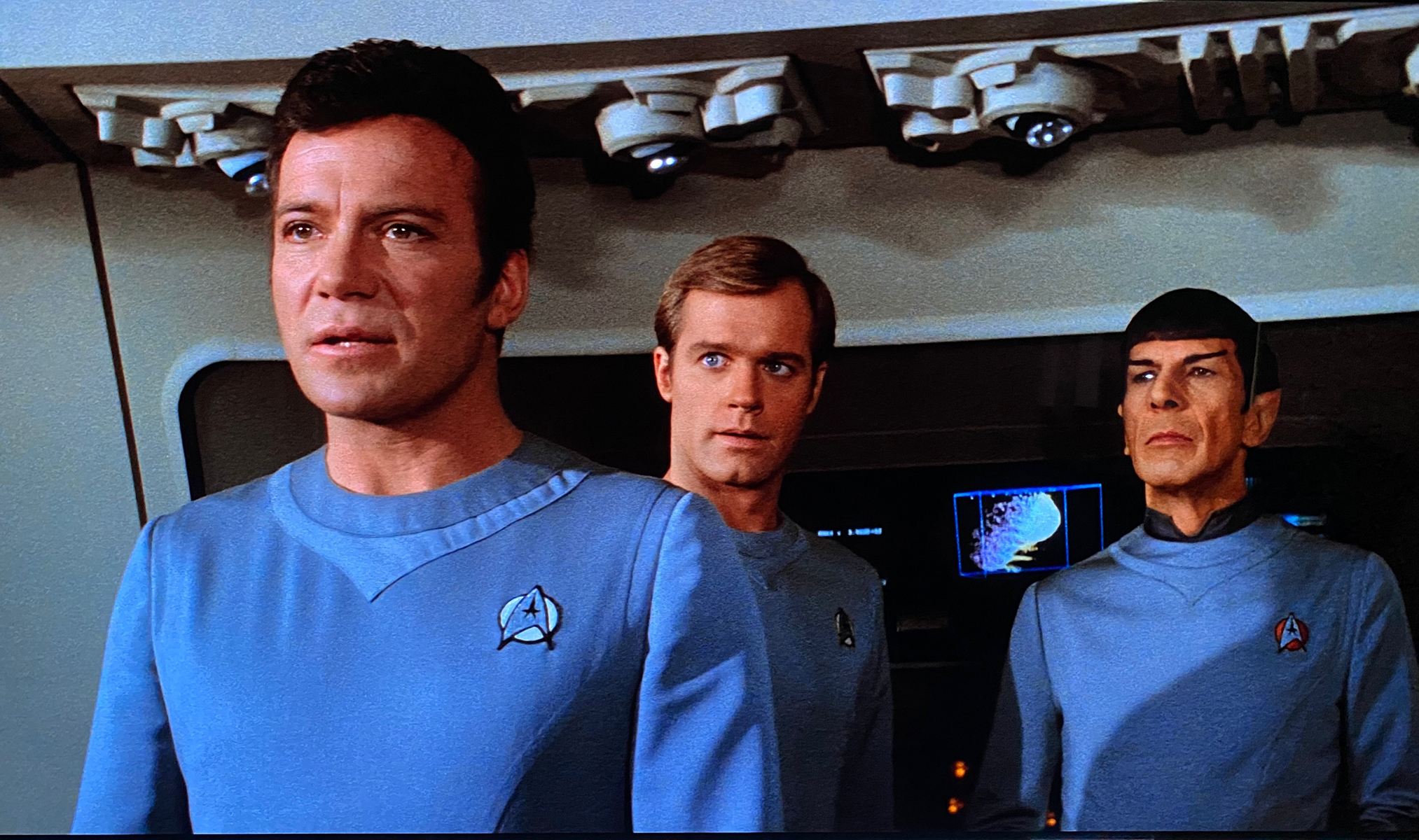 So. Is all of this worth the upgrade if you own the 2021 version? If you are a Trekkie, the answer is a resounding yes! The more coherent storyline, better effects, and Dolby Atmos sound make this the clear winner. If you are a staunch fan of the earlier editions, you’ll have to decide for yourself. I should also mention the sound is excellent and dynamic. The opening still has the almost 4-minute “Ilia’s Theme” prelude score by Goldsmith, but now instead of a blank screen, we are treated to a UHD starfield passing by. It sounds very lush in Atmos, so that’s another kudo to Paramount which spent a long time restoring and re-mastering this beloved film into UHD. There is also a bonus BD included with hours of new and legacy features, including extensive behind-the-scenes footage and deleted scenes. I highly recommend this purchase, but I cannot live long and prosper until I get my hands on the re-mastered Wrath of Khan! 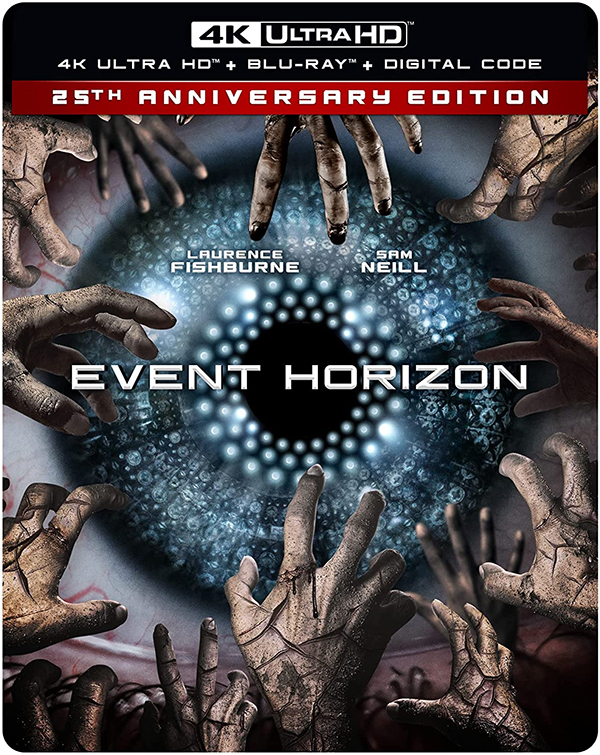 This is the 25th anniversary of the cult space horror classic that makes you realize that not all space films need an alien running amok. The spacecraft Event Horizon was dispatched into a black hole and disappeared without a trace for seven years. It suddenly returns near one of Neptune’s moons and the crew of a rescue ship must find out where she has been for all these years. It becomes apparent that the Event Horizon went and opened a portal to another dimension and then the trouble starts. The set production is top-notch, with plenty of high-tech gadgetry and large, meticulously detailed interior shots. With a first-rate set of lead actors and a plot that quickly moves from mystery into horror, it seems no one will get off this ship alive and the viewers will be in for a white-knuckle ride.

My disc came in a collectible steel book which includes a BD version of the film. The 4K presentation really brings out the details and the DV HDR makes fire and colors pop. The soundtrack is moody and well spread around you with some seriously deep rumbles from various explosions and collapsing bulkheads. My only complaint is that some of the dark scenes are a bit too murky, but that was a conscious set design to make the Event Horizon more like a haunted house. This lighting, or lack thereof, was used in Alien for many of the interior scenes, though there were scenes that used bright lighting as a contrast. Like Alien, our crew travels in hibernation pods and they learn the hard way to stay clear of the sick bay, but the plot itself is truly unique. And like Alien, there is a re-watchabilty to this film. Some gates are meant to stay closed… 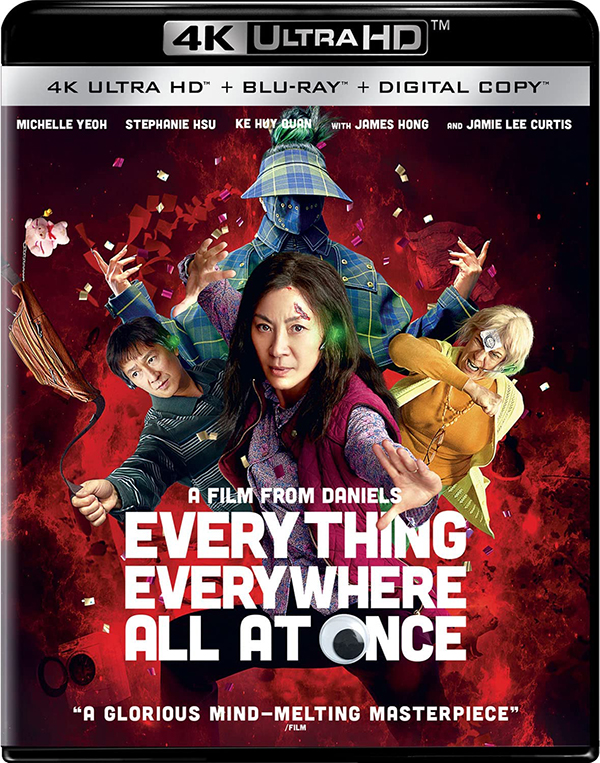 Everything, Everywhere, All at Once

I just finished watching this little gem and am still trying to wrap my mind around it. A flustered immigrant mother is contacted from a parallel universe (multi-verse is more like it) and told that she is the key to saving the world. She (Yeoh) must channel her newly found powers to leap through the splinter timelines of thousands of universes to save her home, family, and ultimately, herself. This movie is full of wonderful special effects and both irreverent and heartfelt at the same time. I’ll be honest, I still cannot piece the whole plot together. This is a flick that needs to be viewed several times to work it all out. Great action sequences abound with a good mix of poignant interaction between characters sets this film apart from the usual Hollywood fare. Rotten Tomatoes said this was “A metaphysical multiverse galaxy-brain head trip”. Yeah. Let’s go with that. In any case, don’t let this one pass you by.

The UHD presentation is glorious with lots of details and explosions of color and light. On my OLED, the colors were natural and the highlights blinding. The sound is also packed with a punch in the subwoofer and the sounds from the surround channels swirl around you throughout. It is in Doby Vision and Dolby Atmos, so if you have a proper setup for this film, you will be richly rewarded. Recommended!

The post What We Are Watching – Fall 2022 appeared first on HomeTheaterHifi.com. 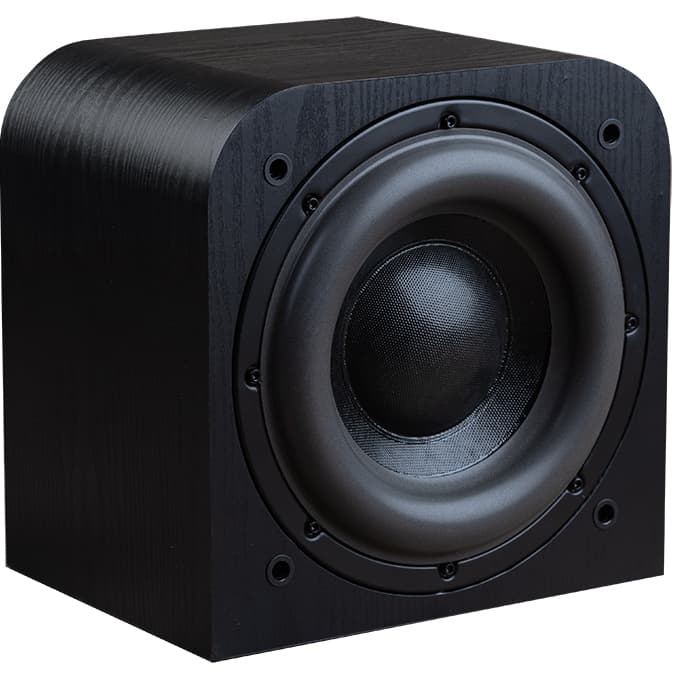